EXERCISE 1: BEHIND THE NECK SHOULDER PRESS

SHOULDER CAP IS IN ABNORMAL PLANE OF MOTION THUS THE LATERAL PORTION OF THE SHOULDER SOCKET IS RESTRICTED BY THE MOVEMENT OF THE ARMS THUS INCREASING TENSION IN THE NECK MUSCLES. 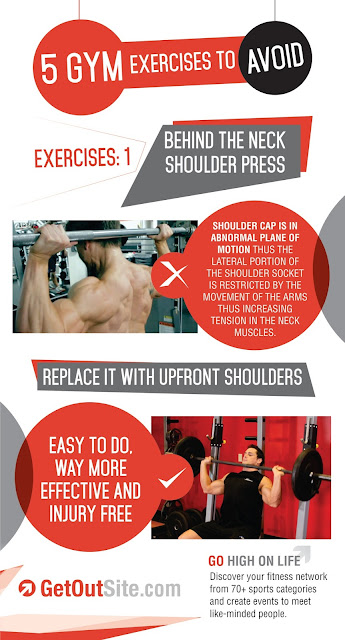 REPLACE IT WITH UPFRONT SHOULDERS

In all my gym time I have seen maximum injury by this exercise. The person starts with the less weight but over time as he puts up more weight over the bars, the shoulder muscle just snaps. The reason behind this is pretty simple. When we do this exercise our shoulder cap is in an abnormal plane of motion. The lateral portion of the shoulder socket is restricted by the movement of the arms, thus increasing the tension in the neck muscles

Avoid... why?
Trying to keep your hands straight while you go down is almost impossible and also dangerous for your elbows, also work is done by biceps and outer shoulder rather than chest itself. 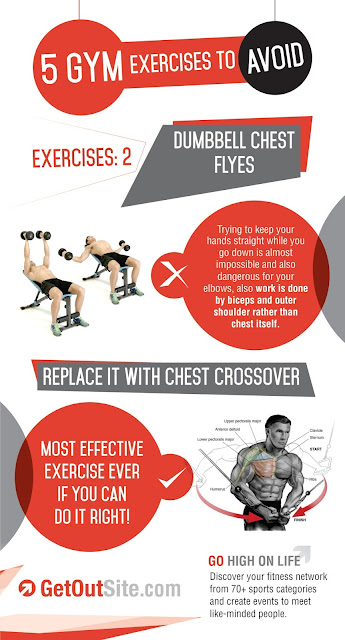 REPLACE IT WITH CHEST CROSSOVER

Most of the guys will hate me to put this exercise in the list. Favorite exercise for starters and first timers in the gym and even I used to do a lot of it. But gradually I realized, it has negligible effect as I am not getting the same burn in the muscle which I used to get from other chest exercises. After studying and reading about it online, I found that most of the work is actually done by biceps and outer shoulder rather than the chest itself. Trying to keep your hands straight while you go down is almost impossible and also dangerous for your elbows.

Avoid... why?
EXERTS A HIGH PRESSURE OVER THE KNEE CAP, CAUSING JOINT PROBLEMS WITH TIME AND HEAVY WEIGHTS 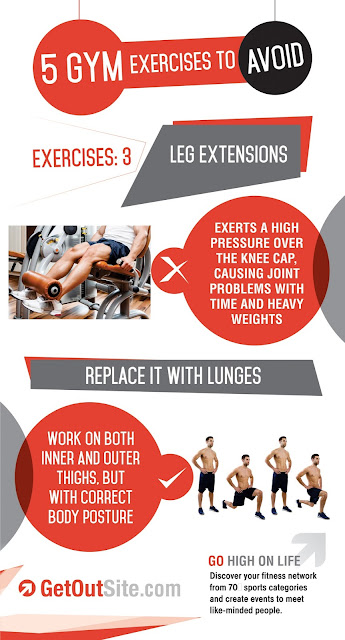 REPLACE IT WITH LUNGES

Leg extension provides good quad burn but may lead to knee pain. Since the load from the exercise (the pad on your shin) is so far away from the hinge (your knee), the movement puts a large amount of stress on the knee joint. These factors may not culminate in injury for everyone, but they could lead to aggravation down the road.

THIS EXERCISE REQUIRE PROTRUDING OF THE HIP AREA, BUT DUE TO OUR LIFESTYLE OF SITTING FOR LONG HOURS, PROPER HIP MOVEMENT CAN BE PROBLEM. 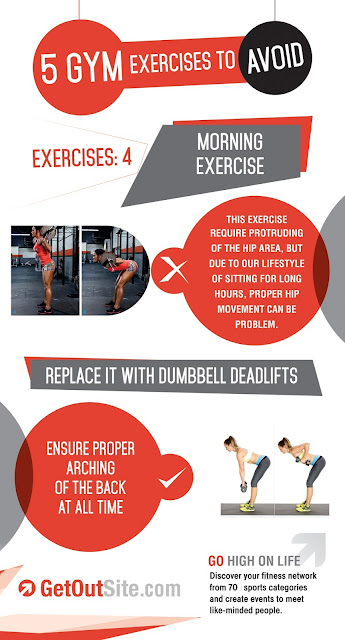 REPLACE IT WITH DUMBBELL DEADLIFTS

Ensure proper Arching of the back at all time.

Cause the upper arm bone to bang up against the ac (acromion process) joint, which can damage the nerves in the shoulder area. 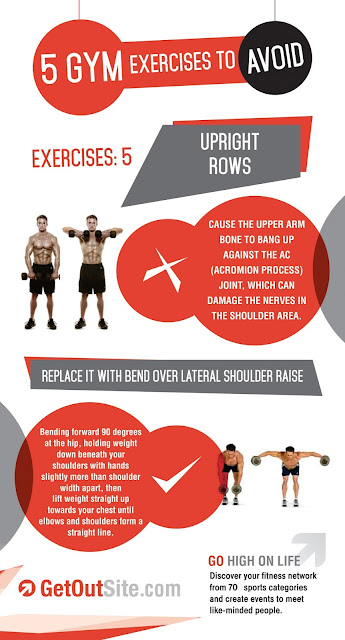 
REPLACE IT WITH BEND OVER LATERAL SHOULDER RAISE

Bending forward 90 degrees at the hip, holding weight down beneath your shoulders with hands slightly more than shoulder width apart, then lift weight straight up towards your chest until elbows and shoulders form a straight line.